The Ensō Circle (Written as the Enso Circle in Latin script)

Ensō (circle) is a sacred symbol in the Zen school of Buddhism and is one of the most common subjects of Japanese calligraphy, even though it is a symbol and not a character. You may hear it called the Circle of Enlightenment, the Enso Circle, the Infinity Circle and even the Lost Symbol of Reiki. If you actually took the meanings of the two Kanji symbols that make up the word, ensō would translate as Mutual Circle or Circle of Togetherness.

To discover the meaning of Ensō we need to look backwards. In the sixth century a text named the Shinhinmei refers to the way of Zen as a “circle of vast space, lacking nothing and holding nothing in excess”. At first glance the ancient ensō symbol appears to be nothing more than a miss-shaped circle but its symbolism refers to the beginning and end of all things, the circle of life and the connectedness of existence. It can symbolize emptiness or fullness, presence or absence. All things might be contained within, or, conversely, excluded by its boundaries. It can symbolize infinity, the “no-thing”, the perfect meditative state, and Satori or enlightenment.  It can even symbolize the moon, which is itself a symbol of enlightenment—as in the Zen saying, “Do not mistake the finger pointing at the moon for the moon itself.” In other words, do not mistake doctrines, teachings or explanations, which are intended to guide one toward enlightenment, for enlightenment itself. Ensō can also represent the moon’s reflection on water, thereby symbolizing the futility of searching for enlightenment outside oneself.

Ensō symbolizes many more things including: strength, elegance, the universe, single mindedness, the state of mind of the artist at the moment of creation and the acceptance of imperfection as perfect. It also represents the oneness of life and all things contained within it, the spirit of harmonious cooperation, personal development and refinement of character, the visible and the invisible, absolute fullness in emptiness, simplicity, completeness, endlessness, perfect harmony, the circle of infinity and the cyclical nature of existence.

Why not check out our complete guide to the Bhuddist Symbol?

The ensō is a manifestation of the moment, an expression of absolute enlightenment, a visual manifestation of the Heart Sutra and a representation of our true and innermost self. The ensō is a universal symbol of wholeness and completion; “form is void and void is form.” When viewing ensō, one can see that that form and void are interdependent and, in fact, define each other. With so many definitions available, each of us is truly left with the responsibility to select or create our own definition of ensō. 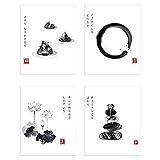 Creation of an ensō symbolizes a moment in time in the life of the artist when the mind is free to simply let the spirit create through the physical body. Ensō is a fascinating expression of individuality as expressed by variations in ink tones, brushstroke thickness, shape of the circle and even the positioning of the single point where the circle begins and ends.

An ensō might seem simple to draw but only a few painters are known for their excellent ensō, which are said to represent their mastery of Zen. It is believed that in the hands of a Zen master the power of the ensō symbol is released, helping those who meditate upon it to reach a higher level of consciousness. As a symbol of enlightenment, Zen masters often brush paint an ensō for their student to meditate upon. The quality of the brushwork is said to reveal the depth of the master’s enlightenment. The brushed ink of the circle is usually done on silk or rice paper in only one movement, thereby eliminating the possibility of modification. The single brush stroke may be large, painted with a broad vigorous stroke, or it may be narrow and refined.

The ensō reveals the expressive movement and character of the artist’s spirit and leaves the creator fully exposed at one particular moment in time. Zen Buddhists believe that only a person who is mentally and spiritually complete can draw a true ensō. Some artists paint ensō with an opening in the circle, while others complete the circle. An open ensō may express the idea that the ensō is not separate from all that is; rather, it is a part of something greater. The open circle reflects that the ensō is not contained within itself: but opens out to infinity. It might also speak to imperfection as an essential and inherent aspect of our existence. Ensō can be the open circle of emptiness in which the self flows in and out while remaining centered; or it can be closed and express a mandala or cosmogram. Leaving the ensō open is like leaving room for the spirit to flow in and out of the circle of emptiness; allowing it to breathe. Breath and emptiness are essential ingredients for meditation, contemplation and the creation of a spiritual life.

Many artists choose to use the ensō as a starting point in a drawing. Ensō can be drawn alone or accompanied by inscriptions, poems or words of wisdom. The inscription is usually placed to the side of the ensō but can be located anywhere, including inside the circle. Traditionally the inscription was a quotation from a Buddhist text but it can be anything – even humor – which reminds us to enjoy the moment. Artists may also put their hanko or name stamp in the picture.  Since you won’t have a name stamp available, feel free to create your own.
Drawing an ensō is a meditative or contemplative exercise and many artists practice drawing an ensō daily as part of their spiritual practice. Traditionally, the Zen artist might meditate in silence for a long time before the brush and paper. When the drawing is executed, it is done quickly and spontaneously, as an inevitable expression of what already existed within the artist.

Ensō as a Zen symbol

This is a Zen symbol of the absolute, the true nature of existence, the duality within life and the imperfection of all things. It is a symbol that combines the visible and the hidden, the simple and the profound, the empty and the full. The very imperfections and contours of the ensō, which must be painted by human hand rather than constructed as a mathematically correct circle, make the ensō a manifestation of perfection. It is perfect just as it is, even in all its imperfection. Ensō suggests to the student to stop striving for perfection and allow the universe to be as it is. Abandon the idea that there is a one size fits all path that ends at some specific point, place or time. When you believe that you have arrived at some final destination on your path, ensō reminds you to start again exactly at the point where you are now and to embrace and enjoy your unique experiences on life’s journey.

How to paint an Enso Circle

Egen is an avid Zen fan and dedicated sharer of knowledge.

Modern and urban life may be getting increasingly stressful. Dependency on technology and machines is further aggravating the issue. However, meditation techniques including Zen (also called Zazen)...