What is the Om Symbol and what does it mean?

Om (which is sometime spelt Aum or Ohm) is a sacred sound that is also represented by the Om Symbol you see in so many walks of life. It’s the one symbol the represents the past, the present and the future in completeness.

Today, the Om symbol and its corresponding chants and recitations are very much popular around the world, and forms a part of the the many symbols of Buddhism. It weaves around different faiths and are perfectly acceptable to people from all walks of life and beliefs. People relate to Om because the ideas of peace, tranquility and unity are universally desired for. And the Om symbol and chant reminds people to slow down, relax, and be conscious of their breathe. The Om symbol is also recreated through jewelry and decorations.

The Om Symbol and the Om Sound

Om is a sacred sound or chant that is popularly known in Hindu circles and other faiths as the sound of the universe. It encompasses everything, is the focus of ultimate reality, and reconciles everything in this world and in the universe. The vibrations that you create when you vocalize the Om sound energizes the chakras throughout your whole body, with special mention of the third eye and crown chakras, that are our connections with our Divine personas. The chakras are the concentrated energy centers of our body which have the important responsibility of absorbing positive energy from the Om and also emanating back this energy. This interaction between the Om symbol and the chakras keep us functioning at an optimal level.

The Om symbol sound is a short, seed mantra which is recited peacefully to connect it with the chakras, and in the process, gives energy to the chakras. It also gives enrichment to yoga and meditation practices. 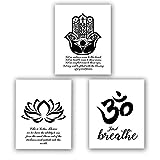 The Om Symbol and the word

When written as AUM (as some people prefer) the letters can be translated as follows: The letter “A” denotes the waking state; “U” is the dream state; and “M” represents the state of deep sleep or the unconscious state.

In the Om symbol, the waking state is the bottom curve, the dream state is the middle curve, and the state of deep sleep (unconscious state) is the upper curve. Above the curves is the crescent which means maya or illusion, which blocks the route to the highest state of bliss or peacefulness. This highest state is represented by the dot at the topmost part of the Om symbol. It is the fourth state of consciousness and is absolutely wonderful and tranquil. There is a widely held belief that the fourth state is the condition wherein anyone can realistically link up with the Divine.

1) The Waking State is where you are totally aware and there is general consciousness, looking outwards of the body. This is where the five senses are utilized to experience the material world.

2) The Dream State – Whereas the waking state looks outwards, the Dream State makes the consciousness look inwards, and a subliminal or different world is experienced through dreams behind closed eyes.

3) The Unconscious or Deep Sleep State (the upper curve) is where the mind desires of nothing and is blacked out or shut down – a deep slumber. There are no dreams.

4) The Crescent – the illusion or the maya, is the obstacle between the Unconscious State and the Absolute State. It gets in the way of your spiritual development. This semi-circle shape doesn’t touch the Dot of the Absolute State, meaning the Highest State does not allow being affected negatively by the Maya.

5) The Absolute State which is being tried to be blocked by the crescent, is where your consciousness is neither facing inwards or outwards but is so peaceful and pure, that it is the ultimate spiritual state of being which everyone should strive for.

The history of the Om symbol

Om, Ohm, or Aum, was first mentioned in the Upanishads or the Mandukya Upishad, which are sacred Hindu texts that explain different comprehensions of the Ohm.

One explanation of this Hindu document about the Ohm is that it is immortal and that it represents all awareness of time: the past, the present, the future, as well as overtaking time itself.

These texts are linked with the Vedanta, one of six major Hindu philosophies, and the deep aspects of the Ohm mystery are thoroughly explained in the most ancient Vedantic writings. The Om symbol’s interpretation is regarded as infinite and without end, eternal language and knowledge, and is the purest base of life and of everything that exists.

The Om symbol is also well represented not only in the Hindu faith but also in Buddhism and Jainism lore. The Om symbol is part of the engravings, illustrations, and manuscripts representing all 3 religions. Plus the Om symbol and its intriguing chant are part and parcel of yoga and meditation practices.

The Om symbol is the all encompassing cosmic vibration of the universe. The Om symbol is a series of curves, and then a crescent, and then a dot. When you want to know the meaning of the Om symbol, you cannot understand it fully if you just look at its visual form. You should understand that it is derived from the states of consciousness that Aum represents.

Many also believe that the Christian “Amen” and the Islamic “Amin” originate from Om. If such power emanates from the Om symbol and its chant, it could have had helped millions of people throughout the centuries attain enlightenment and understand their important role in the universe. 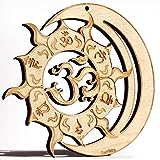 What does the Om Symbol represents?

For many people of many faiths, there are slightly different understandings of what Om represents. Let’s look at some of the most common

Thr Hindu God Ganesha is also said to be interlinked with the Om symbol. It is because the shapes in the Om Symbol I quite similar to Ganesha’s elephant form. His head and belly are the curve on the left of the symbol while his trunk is the curve on the right. Ganesha is the Hindu God who removes obstructions or obstacles and lets go of every desire and everything material before the Absolute State of Bliss is attained. That is why Ganesha is very similar to what the Om symbol stands for.

There is a Hindu belief that the Creator God Brahma’s mind processes started a vibration that evolved into the sound a Om, This is what lead to the creation of the world. This is how the Ohm has been linked to the belief that the vibrations made by chanting Om lead back to the vibrations that created the world. Om is also connoted to as Pranava, which denotes control of your life force.

Om and the Holy Trinity

Another word for Om is Aum. The three phonetic parts of Aum represent the rule of three, similar to how several Faiths are built around a Holy Trinity. Aum or Om represents not only three states of consciousness but also three realms: Earth, Heaven, and the Underworld. And also the Hindu trio of Gods: Brahma (the Creator), Vishnu (the Sustainer), and Shiva (the Destroyer).

The Om symbol and Tibetan Buddhism

Om is usually placed at the beginning of Buddhist mantras and dharanis. Om is a part of several mantras of Tibetan Buddhism and symbolizes wholeness, perfection, and the infinite. The most well known Buddhist mantra is “Om mani padme hum”, the 6 syllable mantra of the Bodhisattva of compassion, Avalokiteśvara. Some researchers interpret the first word in that mantra (Om) to be Aum, similar to Hinduism which is the totality of sound, existence, and consciousness.

The 14th Dalai Lama described Om as having 3 letters: A, U, and M. They represent the imperfect and impure body, speech, and thinking of everyday unenlightened life of a practitioner. They also symbolize the pure, enlightened body, speech, and mind of an enlightened Buddha. As a Buddhist symbol, Om is very similar in interpretation to Hindu beliefs.

How to paint the Om Symbol

Draw the Om symbol pattern first, either with a pencil or a 0 number brush (or any low numbered brush). Then depending on your choice of painting material, whether acrylic, watercolor, oil (and others), paint in the color of your choice into the Om symbol. Usually the color of choice is red, because it represents good energy. But others use multi colored designs onto the body of the Om symbol. There could either be a background or no background, it is your choice.

The Om in your every day life.

Have you noticed that when you utter lengthily with care the Om sound, there develops in you a tranquility that you can’t explain. Your mind clears up and your cares in the world shuts down, albeit temporarily. If you turn your palms up as you vocalize the Om sound, this also helps enhances this peaceful experience

There is also jewelry that features the Om symbol. It is very popular because it means unity sit reminds the user and the onlookers to breathe and to focus. It is very much used in both yoga and meditation.

You should be familiar that when you observe a yoga class, they chant Om as a common practice because this recitation leads to calming their minds and refreshing their bodies.

If you have embraced the important role of the Om symbol, in your life, remember that you are united with a long line of believers from all faiths, that believe in the importance of slowing down, and taking stock of our life, and what really matters: our spiritual realm.